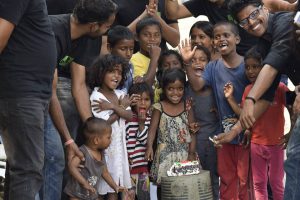 Together we can make a Difference

The co-founder (Akhilesh Yadav) of this organisation belonged to a lower middle class family. In 2011, his life changed drastically when a gas cylinder exploded in his house. Except his father, all other family members got burnt very badly along with his two neighbours. He did not have any shelter and also could not afford to visit a doctor. Everyone tried to help him and his father by donating them some money. He used to sleep at others houses and had food at their houses. He did not have proper clothes to wear. His condition was extremely tormenting. He lost elder brother in accident. He took loan to survive and stand up for himself and his family. Since then he understands the condition of not having when needed. He then decided to return this loan back to the society in a good way by helping them.

When he was going to join his new job at Reliance Power, someone gifted him new clothes. Since then he was thinking about forming his own organisation in Bhilai, Chhattisgarh so that he can help people without taking any money from them. Though, he had the concept in his mind but execution of the idea was not so easy. During the past years, a discussion with Dhiraj Gill, one of co*founder of Pay, took place to open the NGO but because of the fund required to open is the main issue to solve. For that he was trying to move gilf countries to earn money to open the NGO. But Dhiraj Gill suggest him that it requires a pure heart and courage to open. Money will come in any ways.

By considering this idea in mind, this idea was discuss with Mr. Dhiraj Gill and Mr. Pankaj Ramteke ,we have open an organisation named “PAY” and through facebook, we have contacted many person who required logo and advertisement for their startup. The money which we earned was first donated clothes to 134 children of Shradhanand Ananth Ashram on 11/04/2016.

But we were not able to earn enough money by designing logos and ads. Then for making more funds we started posting requirements on facebook. This way we have got many donation from our friend circle and continue our work of helping the needy ones by spreading smiles in many ways.